The Mission District is a large district bordered by U.S. Highway 101, Market, Dolores, Potrero and Cesar Chavez. Contained in a flat hollow between the Castro and Potrero Hill, the Mission District stretches south from SoMa to Bernal Heights. Most of the action takes place in the eight blocks between the two BART stations (16th and 24th streets) along Mission, Valencia and Dolores. The Mission District architecture is distinctive and original as its history and inhabitants.

The Mission District is one of San Francisco’s oldest neighborhoods, and has served as home to a number of different ethnic and socioeconomic groups over its long history. The area was originally inhabited by a tribe called the Ramaytush who died of smallpox and other ailments when the Spanish settlers forced them into a confined area.

In the decades after the Gold Rush, many of the neighborhood’s residents were squatters. Halted by the sand dunes of the western half of the city, they moved south into the area which had flat terrain, and, shielded by hills and protected from the cold fog that plagues most of the rest of the city, was the city’s warmest district. Yankee squatters arrived in the 1840’s, a wave of German and Scandinavian immigrants in the 1860’s, and rich local merchants who built the Victorian era mansions on South Van Ness and Liberty Hill in the 1870’s. The northern part of the neighborhood became a recreation center with a race-track, restaurants, a zoo and the two-block “pleasure resort,” Woodward’s Gardens.

Of the more than 1,500 individuals and companies building, moving and remodeling houses in San Francisco in the 1880’s and ‘90’s, only about a quarter of them were high art architectural practitioners (and even they were primarily self-trained architects) who designed unique homes for specific clients. Low art architectural practitioners (including builders, contractors and developers) who purchased multiple lots and constructed clusters of two or many homes, identical in plan, to take advantage of mass-production and offer low prices were actually the most important force in shaping San Francisco’s built environment during the 1880’s and ‘90’s, the decades of intense building. Initially all houses in a cluster were built to look alike, but soon this became undesirable and builders began to offer minor choices in exterior detail and paint color to the prospective buyer. Eventually all houses varied at least slightly. Owners-builders – as several hundred people described themselves – were another important influence on Victorian era construction; the majority built only the houses in which they lived, but a few became real estate developers.

Dr. C. C. O’Donnell hired “daywork” to build five slightly peculiar homes in 1887 for $4,000. Perhaps he also designed them, for the cluster at 1328-46 York Street in the Inner Mission neighborhoods looks like none other in the city. Fernando Nelson constructed clusters in the Inner Mission, many still standing. George Edwards scattered his houses throughout the Mission District. 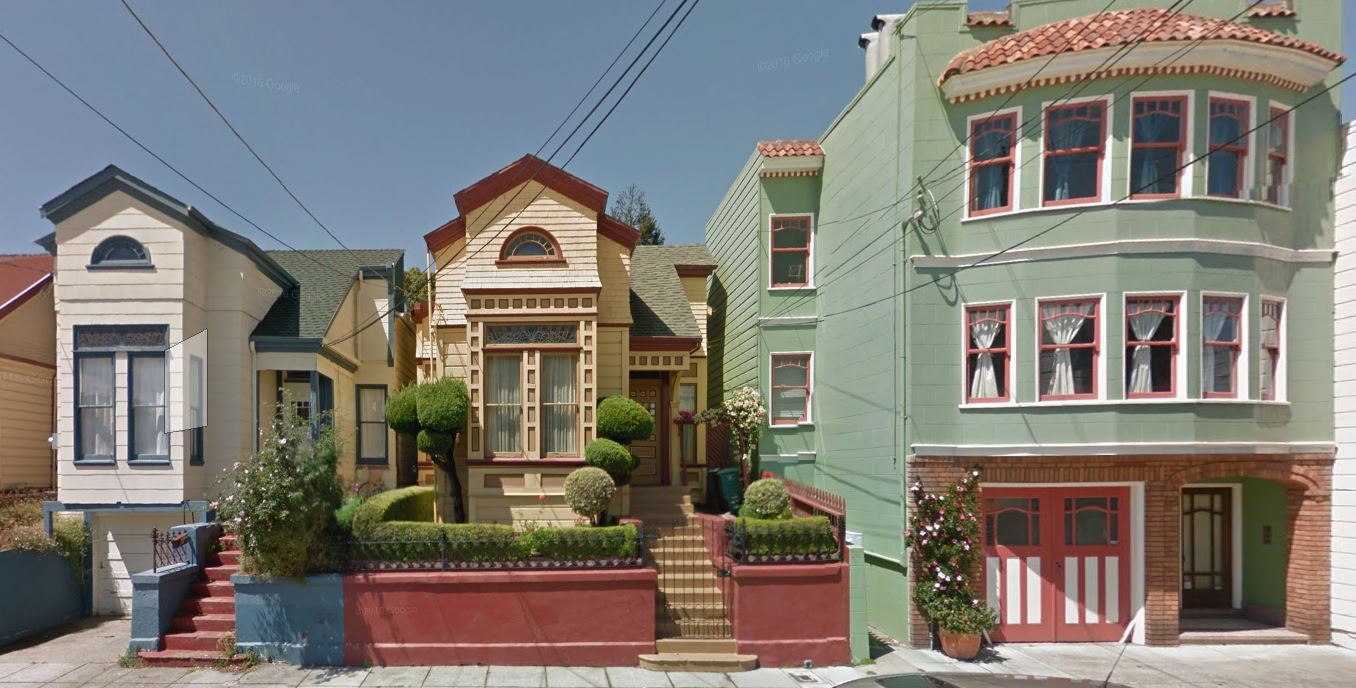 Since most records were lost when city hall burned in the 1906 earthquake and fire, we do not know who designed and built many of the city’s Victorian era structures, or if indeed anybody did design them as we define that term today. The fact that some of the buildings did, indeed, have architects is today almost incidental; it is not in their origins that value exists but in the fact that they survived the 1906 earthquake and fire and, in many cases, misguided improvements, years of neglect, and looming demolition for newer construction.

Mission residents in the early teens developed a distinctive accent that allegedly sounded much like Brooklyn’s.

Todays Mission District and the Impact on Architecture

While today families of Latino descent hold the majority, Filopino and Vietnamese immigrants are moving here as well. Since the 1950s, the Latino population in the Mission has doubled every 10 years lending the neighborhood much of its current flavor.

When Silicon Valley insta-millionaires recently decided it was chic to live in the Mission, many Latinos were displaced. The Valencia Corridor became a hip, trendy neighborhood drawing people from across the city to enjoy the nightlife. There is a thriving arts scene – theater groups, cultural centers and a flourishing Latin literary network.

Neighboring Bernal Heights, one of the first to show signs of the Victorian revival movement, had entire blocks brightened with new paint and restored to their former elegance. But even in the lesser-known “flatlands” of the Mission District are clusters of Victorian era houses. The 1976 survey found some 2,600 Victorian homes in an area bounded by Dolores, Cesar Chavez and Market Streets and the U.S. Highway 101. More than 900 are Italianate houses of the 1870’s. Another 800 are the Stick-style houses popular in the 1880’s. Only about 550 Queen Anne houses were found, for by the 1890’s, most Inner Mission land was already built upon. In addition to the outstanding examples of Victorian era architecture, two other notable landmark buildings are the old Levi Strauss factory, and Mission Dolores.

The Mission District is famous for its huge painted scenes on the walls and facades of buildings, always a part of the Mexican community and a long established tradition in our city. There are nearly 600 murals in San Francisco, with the highest concentration in this neighborhood.

Share you comments on San Francisco’s Mission District architecture below.