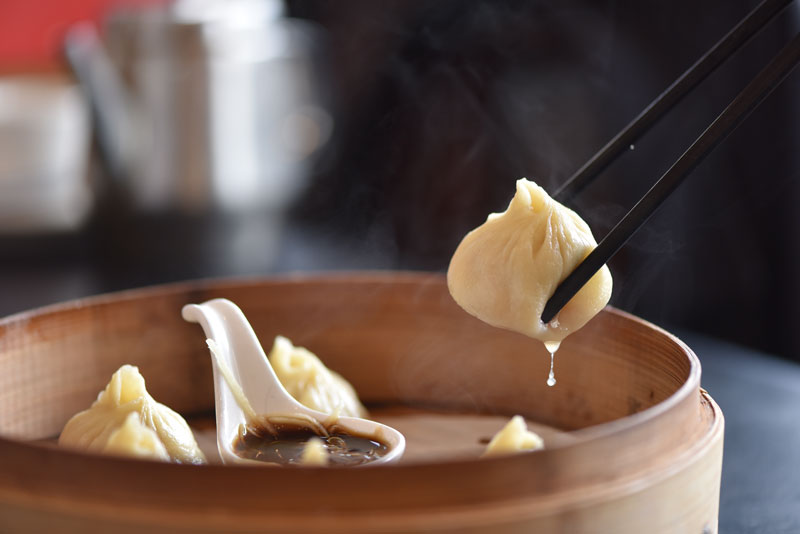 Xiao Long Bao, which is the official Chinese name for a juicy, pork-filled dumpling, is attracting attention in the West too. Since many Americans have trouble pronouncing Xiao Long Bao, it has earned the name soup dumplings instead. The Chinese name for this dish translates to small basket buns because that is how it is steamed. In addition to a pork-based filling, soup dumplings have a delicate skin and a broth made from gelatinized meat.

This dish originated in Nanxiang, a suburb of the city of Shanghai, and was first sold by vendors on the street at the end of the 19th century. Although it took nearly 100 years, it became popular enough to show up in New York City restaurants in the early 1990s. Before long, soup dumplings appeared on menus in Chinese restaurants across the United States.

Soup dumplings are unique among Chinese steamed dumplings because they contain both broth and filling and not just meat alone. This can make it challenging to create and eat them. Authentic Chinese cooks typically use crab or pork as filling for these bite-sized treats. The liquid inside of Xiao Long Bao is an aspic, although people often refer to it as soup, broth, or juice.

When preparing this dish, the cook cuts the aspic into cube shapes and mixes it into the filling material. He or she then wraps the entire mixture in a thin dough wrapper and seals the top to ensure that the aspic remains inside during the cooking process. The last step is to steam the soup dumplings in a bamboo basket for approximately eight minutes. This enables the aspic to melt so it becomes juice, the dough to rise, and the filling inside to become warm.

Although most diners agree these dumplings are delicious, people who are new to eating them can struggle to get them onto a utensil or burn their mouths. To get the soup dumpling from the steamer to a plate, diners should use a soup spoon to dig it out and a pair of chopsticks to retrieve it. Those who haven’t mastered chopstick use can substitute a fork for this step. Asking the server for a pair of tongs or removing the dumpling with clean hands are additional options. However, diners should remember that tugging on the dumpling can cause it to tear.

Restaurants typically serve Xiao Long Bao extremely hot, so diners need to allow several seconds to release the steam from the dumpling once they have retrieved it from the steamer. If a larger spoon is available, restaurant patrons can use it to cut off a small bit from the side of the dumpling. This allows the broth to drain onto the spoon so he or she can sip it first. If the restaurant only provides smaller spoons, the diner should use one to remove a small portion off the top of the dumpling and suck the juice from the skin. It’s now perfectly safe to eat.